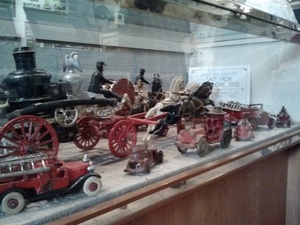 In honor of Fire Prevention Week, the Mount Dora History Museum has a new display of cast-iron fire apparatus models.  The collection dates from 1910 to the 1940s.  The museum is open Tuesday through Sunday from 1:00-4:00 pm at 450 Royellou Lane in Mount Dora.  Museum entry is $2 for adults, $1 for students, and free to Historical Society members.  For more information, call 352-383-0006 or visit www.mountdorahistorymuseum.org.

Toy fire engines first appeared around 1880, made of cast iron and tinplate. Known as fire wagons, these toys included pumper wagons, horse-drawn chief's wagons, ladder wagons, and other accessories.  Interestingly, the toy fire trucks of the 1920spredicted the engines of today.

Toy makers combined the traditional horse-drawn wagons with a truck body to create something similar to today's fire engine. The three most famous makers of these early fire-fighting toys are Dent, Kenton, and Hubley, though other companies like Tonka and Marx would later make smaller scale tin and steel engines. (http://www.collectorsweekly.com/firefighting/model-trucks)

Fire Prevention Week was established to commemorate the Great Chicago Fire, the tragic 1871 conflagration that killed more than 250 people, left 100,000 homeless, destroyed more than 17,400 structures and burned more than 2,000 acres. The fire began on October 8, but continued into and did most of its damage on October 9, 1871.

While the Great Chicago Fire was the best-known blaze to start during this fiery two-day stretch, it wasn't the biggest. That distinction goes to the Peshtigo Fire, the most devastating forest fire in American history. The fire, which also occurred on October 8th, 1871, and roared through Northeast Wisconsin, burning down 16 towns, killing 1,152 people, and scorching 1.2 million acres before it ended.

Those who survived the Chicago and Peshtigo fires never forgot what they'd been through; both blazes produced countless tales of bravery and heroism. But the fires also changed the way that firefighters and public officials thought about fire safety. On the 40th anniversary of the Great Chicago Fire, the Fire Marshals Association of North America (today known as the International Fire Marshals Association), decided that the anniversary of the Great Chicago Fire should henceforth be observed not with festivities, but in a way that would keep the public informed about the importance of fire prevention.  The commemoration grew incrementally official over the years.

In 1920, President Woodrow Wilson issued the first National Fire Prevention Day proclamation, and since 1922, Fire Prevention Week has been observed on the Sunday through Saturday period in which October 9 falls. According to the National Archives and Records Administration's Library Information Center, Fire Prevention Week is the longest running public health and safety observance on record. The President of the United States has signed a proclamation proclaiming a national observance during that week every year since 1925.